Hello? Anybody out there? *blows dust bunnies off blog* Oh, there you are! Yes, I haven't been here in a while and it looks like the spiderwebs have taken over, but nothing a little spring...er,summer, cleaning won't do.

You see, 2014 has been quite a year. Between family health dramas, unplanned home remodels due to water leaks, thus displacing me and my computer mid-novel, and my son dealing with a shooting at his college and the loss of a friend, it's been more "write what you know" material than I could ask for in a lifetime. But sometimes when the volume is turned up, it acts as an interesting catalyst to make the time you otherwise might not for the things that are really important to you.

In my case, that was finishing my latest YA contemporary novel, REBEL WITHOUT A CLUE. And naturally, I wrote this when I was supposed to be revising another novel, but often that's the way these things go. Rule #1 of writing: Never fight the muse.

So what's it about? Glad you asked! When 17-year-old Hank Kirby's attempt to ask a girl to Prom by lighting sparklers on her lawn literally goes up in flames, he attracts the attention of a very different girl, Peyton, a brooding loner and budding pyromaniac with some dark secrets of her own, who admires his handiwork and thinks he's a kindred spirit.

I LOVE this novel, these characters, this story, and I hope that one day they will be out in the world to share with readers too. This book just flowed out of me, as if the story demanded to be told, and the characters themselves told me where the story was going. I did not outline at all. Not that this is unusual for me - I am indeed a total pantser (but so is Stephen King and he's doing all right) but this went above and beyond the normal way I write. Usually, I have some idea where things are going, but there were twists and turns and all the feels moments I didn't even see coming until I wrote them, and that's when you know deep in your gut that you might be on to something good. I got some encouragement that I might be on the right track when REBEL WITHOUT A CLUE (then titled HANK KIRBY) recently won second runner-up for Best Young Adult Novel at the Los Angeles SCBWI Spring 2014 Writers Day, which was beyond awesome.

This is a novel about friendship and loss and second chances. It's about finding the friends that understand you and get your crazy and about the places where we're broken. The older I get, the more I appreciate the value of those friendships of the heart with those people who saw the flaws and loved me despite them. The people who stuck around. The people who knew just what to say and when to say nothing at all. But most of all, this book was inspired by my understanding through the events of my life that darkness is merely a temporary absence of the light.

Of course, just because you finish writing a novel doesn't mean it's really done. Some could argue a novel is never really done, even after it is published, as the writer can always go back in and find little things to tweak and change. From here, I get feedback from critique partners and fellow writer friends, I dive back into revisions and the process begins anew until it is ready to go out on submission to editors. That could take anywhere from a few months to over a year. It's really hard to say.

Fingers crossed in the meantime that this is the one, and that you will get a chance to meet Hank and Peyton and all the other quirky characters very soon! 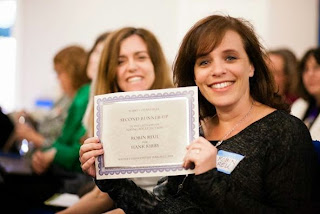