One of my favorite parts about the path leading up to the debut of MY KIND OF CRAZY has been becoming friends with the hilarious witty and insightful fellow YA author Kurt Dinan.

Not only do we share a publisher (yay Sourcebooks Fire!) but we also share a release date, and having someone to navigate the murky waters of the unknown with has been such a great experience. We've traded everything from marketing and writing advice to debating about which of Rory's boyfriends on Gilmore Girls was the most annoying. Kurt's real-life wit spills onto the pages of his debut novel, DON'T GET CAUGHT, which is about a high school nobody who, through a series of increasingly inventive heists that turn into an all-out prank war, finds his people and his voice. In his non-writer life, Kurt has taught high school English for over the last twenty-one years, and while he's never pulled any of the pranks detailed in DON'T GET CAUGHT, he was once almost arrested in college for blizzarding the campus with fliers promoting a fake concert.

To celebrate our upcoming debuts, Kurt and I thought it would be fun to interview each other and chat about the writing life and give a little behind-the-scenes of our books. So without further ado, let's dive in! 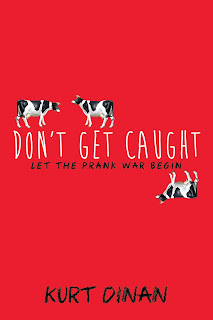 Robin: In THE BREAKFAST CLUB, the brilliant John Hughes movie that your hilariously witty debut DON’T GET CAUGHT has been compared to, Principal Vernon asks all the characters to write an essay saying who they think they are. They had a thousand words or less to do it, but you’re a writer, and a clever one at that, so in 50 words, who is Kurt Dinan?

Kurt: I’m a father of four who teaches English in Ohio’s largest public high school. When the papers are graded and the kids are in bed, I write. Or at least I try to. I wrote horror short stories for years, but writing juvenile-humored YA is a lot more me, yo.

Robin: It is often said that there are pieces of the writer in each of the characters they create. What was the inspiration behind your main characters and which one(s) do you feel are the most like you? Which one would you most likely have been friends back when you were in high school?

Kurt: It’s funny, because every writing book says you should use the people you know as characters, but this was the first time I ever did that. None of the characters are exact copies, obviously, but I borrow from a few people I was good friends with. In high school I was definitely the most like Max in my feelings of not really fitting in. I got along with people and had friends, but I didn’t have lifelong friends until I got to college. I had a very Wheeler-esque friend in high school--the screw-up who’s probably too smart for his own good--and had a crush on an Ellie Wick-like girl, the all-American teenage girl who has a lot more going on under the surface than people realize. Malone is a combination of two girls I’ve been friends with and they’ve both intimidated in the same way Malone intimidates Max. I use “intimidate” in only the most positive sense of the word, heh. 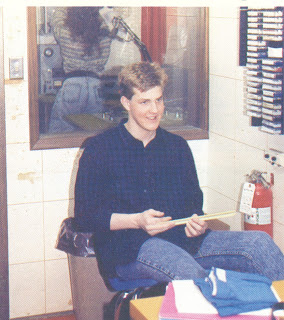 Kurt in his senior year of high school working at the school radio station.

Robin: I think so many readers will relate to Max. All your characters are wonderful and so richly drawn. Which brings me to my next question: Do you come up with characters first or story? Are you a plotter or a pantser? Do you tend to draw your story ideas from real life events that inspire you or a random thought that blossoms into more and takes root?

Kurt: I’m an idiot, so I pretty much come up with a story idea first then shape my characters to suit my needs. That’s the opposite of what every writing book advises doing, and I understand why. It took me forever to get my characters “right”, especially Max. Wheeler, however, came really, really easy for me.

As for process, yeah, I’m definitely a plotter. Like maniacally so. I’ll spend months plotting it all out to the point where I’m probably wasting good writing time. With the novel I’m writing now, I’m trying to be a little less strict and make it up as I go. Like most writers I know, I discover ideas while I’m writing, so I should trust that more. I suppose I’m really just a control freak at heart, unfortunately, but I’m working on it.

With where story ideas come from, I usually do a list of what I’m interested in and/or would be interested in reading and go from there. On the list that led to DON’T GET CAUGHT it says (among other things): ensemble casts, heists, pranks, and juvenile humor. That’s pretty much the novel I wrote, eventually.

Robin: A good friend once told me, “Write what scares you.” Do you have a project you are wanting to write that scares you? Are you interested in writing for adults as well or is YA your niche for the kinds of stories you’d like to tell? Can you share a little somethin’ somethin’ about what you’re working on now?

Kurt: See, I’m practical to a fault, so I only start a project that I think I can sell. It also has to entertain me though, so it takes me a long while to actually get moving. Basically, I don’t have any projects in mind that I won’t write because they scare me; it’s more like I have projects in mind that interest me but I won’t write because I don’t think I could sell them. As much as I’d love to write whatever is in my head, I have to be choosy because I struggle to find writing time to begin with.

I prefer to write YA right now mostly because it’s the world I know. Teaching high schoolers, contantly being around teenagers, it’s sort of a secret “in” that I can use to my advantage. I know my audience pretty well, at least the sort of kids I write for. And since you asked, yeah, I have a new project that I’m working on that is coming sloooowly. Basically, it’s a road trip novel--think Revenge of the Nerds meets The Amazing Race.

Robin: I am SO in! That sounds fantastic! One more for the road: If you had to impart one invaluable writing tip based on your experiences to aspiring authors, what would it be?

Kurt: Oh man, advice? Okay, this is the best advice I can give--find whatever works best for you and do it. There’s no one way to write and anyone who tells you differently is an idiot. I spent a lot of time studying different writing processes and even asking other writers about their processes, and finally the writer Douglas Clegg said, “I think you’re looking for a magic answer, but the truth is there isn’t one.” That helped a lot. My writing process is ever-changing and not very pretty, but it works for me. So my advice, do whatever it is you have to do to make the words right.

Thanks for this opportunity, Robin!

To learn more about Kurt Dinan and to read his interview with me, check out his blog here. You can buy his book at your favorite bookseller or online at Amazon, Barnes and Noble, and IndieBound. You can also follow him on Twitter at @KurtDinan and be sure to add DON'T GET CAUGHT on Goodreads.

Click on the Rafflecopter link below to be entered to win one of two copies of MY KIND OF CRAZY!