I haven't updated this blog in a while, but not because there was nothing to say. In fact, there was SO MUCH to say, but I couldn't say any of it!! So I'll bring you up to speed.

Back in late November, my amazing rock star of an agent, Leigh Feldman, sent my book out on submission to editors. Back then it was called REBEL WITHOUT A CLUE, and it was met with a lot of interest. Publishing moves at somewhat of a glacial pace, so I basically bit my fingernails to nubs and drank a lot of coffee (and sometimes things slightly stronger) as we waited to hear back. We'd gotten an offer of interest from one publisher, and although they would have been an absolute dream to work with, the offer wasn't quite what we were hoping for as a debut. Several other publishers had it too, but we still hadn't heard further.

And then, in mid-February, right when I'd decided to throw myself a pity party of one and climb back into bed and stream Gilmore Girls all day on Netflix because I was sure nothing was going to happen, my cell phone rang. It was Leigh, and said that Annette Pollert-Morgan, an Editor at Sourcebooks Fire, loved my book and wanted to set up a conversation with me that morning.

An hour or so later, I was on the phone with Annette, who just completely "got" this book, and told me she wanted to make an "I Heart Hank" t-shirt. She told me all her favorite lines and scenes, and the ways she wanted to help me make this an even stronger book where the scenes and characters would just pop off the page. It was surreal to hear someone talk about my book this way who seemed to understand every nuance and detail of it as well as I did.

After we hung up, I took a picture of my caller ID, mostly because I'm a noob but also becase I wanted to remember that moment in time forever. The moment my lifetime dream to be a published author came true as an amazing editor offered to buy my book. I made it the background screen on my phone! 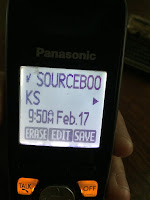 Over the next couple of days, the details of the offer were ironed out, and Annette sent me a beautiful note along with a box of books she had previously edited with personalized post-it notes on each one, saying why she thought I'd like each in particular. (Oh, did I mention we share a mutual love of office supplies??!!) 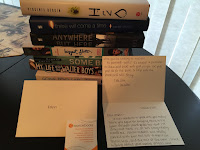 But then....silence. This is, of course, the norm, as I've come to find out. In this time period the publisher goes back and forth with the agent to sort out the contract, the Editor is typing up her edit notes, and the author is making her way through a Costco jar of milk chocolate covered almonds. I wasn't allowed to say anything until the publisher gave me the thumbs up, because they wanted to announce in Publishers Weekly, and it couldn't have been announced elsewhere in order to do so. However, in the interim, some concerns grew over my title. While REBEL WITHOUT A CLUE was fun and certainly captured the humor of the book, the publisher worried that teens might not get the reference to REBEL WITHOUT A CAUSE. Annette and I put our heads together over the next month until we came up with the truly perfect title: MY KIND OF CRAZY. And then, with all green lights in place, this happened!!!

So now I'm back in the revision cave, armed with Annette's amazing edit notes, and having a blast. Once I send this draft back to her, she will send me her line edits, and once she signs off of my draft of those, MY KIND OF CRAZY is well on its way to becoming a real book. Sometime in the Fall, there will be Advance Reading Copies (or ARC's as they are called) that will be sent to reviewers, bloggers, etc. and most of all, I will get to hold my actual book in my hand, albeit not the final version. That comes in April, 2016, just in time for my birthday, which is pretty much the best present ever, am I right??

This morning I discovered the book is already up on Goodreads, so I hope you'll check it out and consider adding it to your reading list!

Six years, three books, two agents, and hundreds of rejections later, it finally happened. There are SO many times I wanted to give up, but at the end of the day, that's not who I am. This is what I love to do, and this book is truly the book of my heart. The delay is never the denial. And it takes a village to make it happen, for sure. So many incredible people I've met along the way that are part of helping make this happen. I'm pretty excited to share it with the world! (And also, not gonna lie, also slightly terrified!!)