COVER REVEALS AND OTHER SURREAL THINGS

I think the second coolest thing to holding one's actual completed book in hand is getting to see the cover for the very first time.

It's been absolutely exhilirating to watch the design team at Sourcebooks work to create the perfect look, and I think they really nailed it. I was also lucky enough to be included in the process, which is rare.

Every writer has some idea in his or her head before the book is even queried what that cover might look like. For me, I had always pictured the title written in sparklers on a night sky background. When my editor asked if I had any ideas to throw into the mix, not only was I excited at the chance to share my vision, but elated when I saw that Sourcebooks loved the idea too and it stuck. The cover has endured many permutations to make sure it holds interest for the widest audience possible and also being so eye-catching that the reader is drawn to pick that one off the shelf because they want to know what that book is all about. That old saying – "Don't judge a book by its cover" – is so true, because like it or not, readers do just that, so it has to be spot on.

The day I received the final cover image and was given the green light to reveal it was a really cool day. In fact, you'd imagine I would have posted this then, but I really wanted to take in that moment.The first breaths the book takes out in the world in any way. Now that it's settled in (as much as it ever could because it's still all so surreal) I am so excited to share my beautiful cover with you. 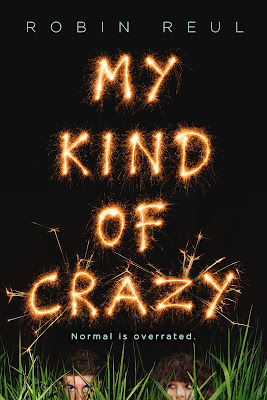 You can read about the cover reveal and a sneak peek at the opening of the book over at YA Highway.

Also, my publisher is running a giveaway of (5) copies of MY KIND OF CRAZY on Goodreads if you want to check it out. As is my life philosophy: "You can't win if you don't play."

Next step: Awaiting ARCs and proofread pages, which are my final opportunity to make any changes to the book before it goes to press. T minus five months and counting. Crazytown. Stay tuned.
at November 03, 2015 1 comment: